May you always be blessed,
with walls for the wind,
a roof for the rain,
a warm cup of tea by the fire,
laughter to cheer you,
those you love near you
and all that your heart might desire.

The ‘wedding breakfast,’ as the reception is sometimes called in Ireland, is a very important part of the marriage celebration. There is some debate as to why it was called a breakfast (as it did not typically take place in the morning), but the most likely explanation is that Catholic wedding ceremonies included a Mass and that guests would have had to fast (as was the custom) in order to receive Communion. They would then “break fast” after the ceremony.

Often held at the home of the bride, or at least hosted by the bride’s family, there were two important rituals that had to be observed during the course of the celebration. The first was to ‘toast’ the happiness, good health, and long life of the bride and groom with a good whiskey or other beverage. The second involved the invocation and blessing for fertility. That is, the assembled family and guests came together to wish the new couple the blessing of being able to have many children.

On this page, I outline several dishes and drinks that you might find at a contemporary Irish wedding. I do so with the caveat that most Irish weddings today feature foods and dishes from all around the world. The food we eat in Ireland, as in America, has become “globalized.” But what about in the past? Irish wedding feasts have always been “special” events, of course, but because Ireland was a predominantly agricultural society where most ordinary people only had access to fairly basic food that they grew themselves, the dishes that were served to wedding guests in the past would not today strike us as particularly “fancy.” Prior to the late twentieth century, most Irish wedding meals would have featured everyday foods like potatoes, root vegetables, pork, fish, and things like homemade brown bread or soda bread. As you’ll see below, the one “exotic” or really special dish was the cake.

But what about corned beef you ask? From the seventeenth century to the nineteenth century Ireland was one of the world’s biggest producers of beef. But beef was very expensive and was out of reach for most ordinary Irish people. It was produced therefore almost exclusively for export, mostly to America. Because the transatlantic journey took so long, the beef had to be heavily salted or “corned” in order to survive the voyage. Irish immigrants to this country were delighted to find that the same beef they couldn’t afford in Ireland was much cheaper in America, and so they took to this “corned beef” with relish. The dish therefore is properly speaking an Irish-American favorite, and is not something widely eaten (or even available) in Ireland itself. But “give the people what they want,” and if corned beef is an Irish classic among your loved ones, by all means include it in your special day. 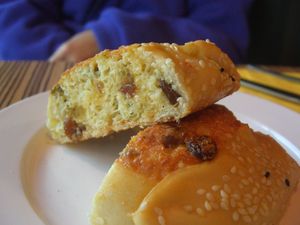 Soda bread has often been compared to the English scone, except it is made into large triangular or square shapes and cut into thin slices. There are several variants. The plainer form can be used as a basis for cheeses and savory foods.

It is more commonly used with butter and jams and can form part of your desert tray.

Brown bread is available in limited supply in the US or you can try making your own. It goes beautifully with smoked salmon. We recommend it highly - it's always a hit!

Soda bread or parsley bread with a nice cheese selection

Soda Bread with a selection of jams 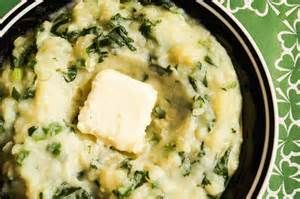 It’s hard to think of an Irish table without thinking of the potato. Colcannon - mashed potato with cabbage through it - was a family staple in our house when I was growing up and it is still my favorite potato dish. From the Irish “cál ceannan” meaning cabbage head or white cabbage head, this dish has gone from being an everyday staple of the Irish rural diet to being something of a delicacy (perhaps because we now think of buttery mashed potato as a decadent treat). There are many ways you can vary the basic recipe such as adding some cream to make it even thicker. Cooked garlic or garlic paste can give it little extra kick. This is one of those dishes that you cook to taste – it’s not a perfect science. If you like it, then that’s the “right” way. Or as my mother used to say when giving someone the details of a recipe, “use your own discretion.”

Serving colcannon in a cocktail glass can make this a really elegant starter. You can even have an entire “potato bar” where you have a line up of cocktail glasses filled with buttery mashed potato and loads of sides and toppings such as bacon pieces, scallions, caramelized onion, cooked veggies, cooked mushrooms or anything else you like. This is sure to be a huge hit with guests, especially at a winter wedding.

Mash the boiled potatoes until smooth

Add in the heated milk, scallions, and chopped cabbage.

Sprinkle with fresh parsley and add a dollop of butter on top.

The salmon occupies a special place in Celtic mythology as it is believed to be a carrier of knowledge and sacred wisdom. In recent times, of course, salmon has been deemed a kind of “super food” full of essential fatty acids and other benefits. Fresh Atlantic salmon has always been popular with the Irish and Scots, and there are endless numbers of ways one might serve this as a main course at a wedding feast.

Nowadays, smoked salmon is as popular or perhaps even more popular than the fresh variety.This can be a really light and sophisticated starter that you might serve either on its own or on thin slices of brown bread garnished with some lemon juice, crushed black pepper, and capers. Other options for toppings or garnishes might be sour cream, finely diced red onion, mayonnaise, tomatoes, or cream. If you decide to do this as a starter, it is worth getting a really good quality smoked salmon. Several mail order companies distribute Irish and Scottish smoked salmon here in the U.S.