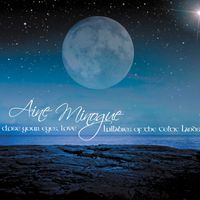 From the recording Close Your Eyes, Love - Lullabies of the Celtic Lands

Sleep, oh babe, for the red bee hums
The silent twilight's fall
*Aoibheall from the gray rock comes
To wrap the world in thrall
A leanbhín ó, my child, my joy
My love and heart's desire
The crickets sing you lullaby
Beside the dying fire

Dusk is drawn and the green man's~ thorn
Is wreathed in rings of fog
**Siabhra sails his boat till morn
Upon the starry bog
A leanbhín^ ó, the paly moon
Hath brimmed her cusp in dew
And weeps to hear the sad sleep-tune
I sing, my love, to you

**Aoibheall of Carraig Leath (pronounced evil of carrickla) commonly known as Aoibhinn the Beautiful - who is the queen of the Northern Fairies.

**Siabhra, is a generic term for an Irish fairy of any kind. In ancient writings the Tuatha de Danann, or little magicians of the Pagan Irish, were called "siabhra" without distinction

~The Green Man,(or Fear Glas in Irish) it is said if you see him in the morning, "no ill follows"; but if at night, death or some other terrible misfortune will surely overtake you. He is sometimes called Fear Liath, or the Grey Man

^Leanbhan is an old Irish word for little child